Keep up to date with the latest news

However, optimism levels worldwide about the senior management jobs market dropped considerably as against their strong outlook at the beginning of 2018 Senior management leaders in India are optimistic about growth of executive jobs in 2019, only second to Brazil. According to the 2019 BlueSteps Executive Career Outlook report, nearly 57 percent of India's senior executives believe that there will be stellar growth in job market opportunities as compared with 2018 levels.

In Brazil, 72 percent leaders are positive of growth. India is followed by Africa at 54 percent and France at 40 percent. The results are based on a survey of over 1,400 senior executives worldwide.

Globally, optimism levels for executives about senior management jobs market dropped considerably as against their strong outlook at the beginning of 2018. "This indicates that while the decrease in optimism does reflect an overall concern in the marketplace, the change may be more of a reflection of how strong last year's market was instead," the report said. 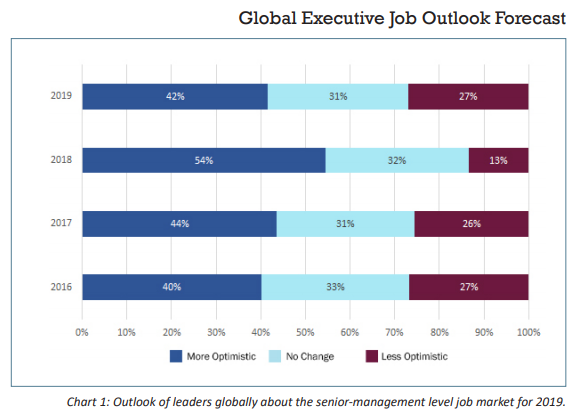 Nearly a third of the respondents cite strong economic growth and business environment as a reason for their optimism. India topped the list with respect to economy forecast for 2019, where 57 percent respondents believed in the pace of the country's growth.

Brazil trailed with 56 percent leaders expecting growth. Leaders of the eastern European countries, the UK and Ireland were pessimistic about their economy.

The technology sector is expected to have the strongest growth at the executive level in 2019, with 70 percent of all survey respondents believing there will be robust growth in the industry.

If you are having any questions, please feel free to ask.

Drop Us a Line